St Leonard’s College is a leading academic school that offers our students the opportunity to excel. Our outstanding academic results are driven by an unwavering commitment to nurturing our young people and encouraging them to believe in their ability to succeed if they give of their best.

As one of Melbourne’s leading academic schools, St Leonard’s College provides our students with the opportunity to achieve academic excellence in either the VCE or International Baccalaureate Diploma Programme (IBDP).

Our Class of 2019 achieved outstanding academic results, as detailed below.

*Students at St Leonard’s College choose either the VCE or the IBDP with both pathways providing year 12 graduates with an Australian Tertiary Admissions Rank (ATAR).

Since joining St Leonard’s College in year 7, Ben has been an active member of our vibrant community. He has enjoyed a diverse array of cocurricular activities, participating in hockey, tennis, swimming squads and running club, while fostering his love for music through the St Leonard’s College Symphony Orchestra (SLSO), chamber strings and quartets. Ben has been an outstanding role model and leader within the College; he was on the student committee every year, was a PEER Support and Scope leader, and College Deputy Captain in 2019. A high performer, Ben was awarded academic prizes each year. Ben received the Duke of Edinburgh Gold Award, the Premier’s Award, Academic Full Colours, along with Year 12 subject prizes in Economics, Mathematics and Biology. Ben says “I’m immensely grateful for the environment created by staff and students at St Leonard’s College, cultivating passion, hard work and a genuine love for learning. This has helped me reach my potential in all areas of academic, cocurricular, social and leadership pursuits. Something I admire about St Leonard’s, making it a place unlike any other, is the sense of belonging and community that exists. Everybody is given a voice and listened to, students are encouraged to follow their ambitions, everybody learns to get involved and shows love and compassion.” Ben was awarded the Melbourne Chancellor’s Scholarship (Commerce) and Melbourne Principal’s Scholarship at the University of Melbourne, as well as the Outstanding Achievement Scholarship (Medicine) at Monash University.

Daniel joined St Leonard’s in year 7 and was a highly committed member of the College community. He enjoyed a variety of cocurricular activities including soccer, futsal, Association of Coeducational Schools (ACS) cross country and tennis, along with a strong focus on music. He enjoyed participating in the Jazz Band, Senior School Musical Orchestra, Stage Band, Swing Band, Symphonic Band, and Wind Symphony. Daniel notes competing at the Mt Gambier National Jazz Championships as one of his College highlights. His passion for music also provided an opportunity to demonstrate his leadership skills through the position of Band Captain. Throughout his time at St Leonard’s, Daniel was the recipient of academic prizes along with Academic Full Colours, House Colours, Music Full Colours and the Silver Award for Outstanding Participation and Achievement for House. Daniel also participated in the Peer Support and SCOPE programs. Daniel says that what he loved about his time at St Leonard’s was “how caring and thoughtful the teachers were.” He says, “They were always willing to put in extra work to help and support me, particularly during the IBDP.” He says St Leonard’s has provided him with “the opportunity to try so many new activities, both academic and cocurricular, allowing me to excel and be the best I can possibly be.”

Commencing in year 7, Luke was an active member of St Leonard’s College life, participating in various sports such as soccer and table tennis, along with a strong focus on musical activities – participating in the concert program, playing trumpet in the Jazz Band, Symphonic Band and Wind Symphony. Luke’s achievements include being part of the da Vinci Decathlon team that won the National Championships and receiving High Distinctions in the Science Olympiad Competition for Biology, Physics and Chemistry. Luke received Academic Full Colours along with many other academic awards including subject prizes for Biology, Mathematical Methods, Specialist Mathematics, Chemistry, Physics, and Literature. He also took part in Future Problem Solving. Luke says “I am most grateful for the support of the teachers in answering all of my questions and providing helpful guidance in general. This is made possible not only by the high quality of the teachers but also the welcoming and accommodating environment that St Leonard’s provides.” During his time at the College, Luke says he “loved meeting like-minded individuals and learning about science, maths and natural phenomena.” Our St Leonard’s College vision is to provide ‘an education for life’. Luke shares, “To me, an education for life means providing a student with the necessary skills and knowledge to achieve their ambitions. It also means instilling them with a social conscience, inquisitive spirit and altruistic values that allow them to lead a fulfilling life.”

Since joining the College in year 7, Ted has been an enthusiastic member of our St Leonard’s community, participating in a diverse array of cocurricular activities including volleyball, badminton and cricket, debating, code club, science and maths competitions and Future Problem Solving. A high-achiever, Ted experienced great success in the Science Olympiad exams, particularly the Earth and Environmental Science Exam in 2018, which granted him the opportunity to travel to the Australian National University (ANU) for a two-week summer camp. Ted also achieved the Top Score Award (top 0.01%) in the Big Science Competition and received a High Distinction in the Australian Mathematics Competition. During his time at the College, Ted received Academic Full Colours and the Mathematical Methods subject prize. Ted also participated in the da Vinci Decathlon, with the team placing first in the National Championships. Ted says, “The people of St Leonard’s College – the students, teachers, and other staff – are ultimately what makes it such a great place. We’re lucky to have such amazing teachers who can competently instruct, however remain in touch with the student cohort.” To Ted, ‘an education for life’ means “St Leonard’s aims to teach values other than purely those of academics. This is largely achieved through the student environment St Leonard’s has fostered, encouraging positive values in relation to student life, as well as our interactions with the community and planet.”

Tessa has been a consistently high-achieving student throughout her time at St Leonard’s after commencing at the College in year 5. She received Academic Full Colours, House Colours, Debating and Public Speaking Full Colours along with academic excellence awards including the IB English A Literature subject prize in year 12. Tessa competed at three national finals in both the da Vinci Decathlon and Future Problem Solving competitions. She was the recipient of the Dr Norman Fary Public Speaking Award in 2017, the Swannie Award for Debating in 2019, and achieved first place in the ACS Public Speaking Competition in 2018. Tessa displayed her outstanding leadership skills in her role as Year 12 House Captain, receiving the Principal’s Award for Student Leadership, along with the Outstanding Participation and Achievement for House: Bronze Award in 2019. Tessa also participated in the SCOPE and Peer Support programs. She enjoyed being involved in the Hart Theatre Company musicals and a variety of sports such as athletics, netball, volleyball, and snowsports. Tessa says St Leonard’s provided her “with an environment to thrive in – in all aspects of my life. Not only did I receive high quality teachers who cared about me and my learning, but also numerous cocurricular and leadership opportunities, as well as friends that will remain with me for life. I have loved being part of such an inclusive and engaging community. With such a focus on a holistic education, I feel as though I am equipped to enter the next stages of my life with curiosity, passion, and determination.”

Gavin commenced at St Leonard’s in year 5 and throughout his time at the College he has enjoyed an array of activities. He participated in table tennis and badminton, leading the mixed badminton team as Captain in 2018, also receiving Badminton Full Colours and Badminton Half Colours. Gavin participated in the Acoustic Guitar Ensemble and the Classical Guitar Ensemble. He was a positive role model, taking part in the Noble Park English Language School Mentoring Program in 2019. Gavin was a committed House member throughout his time at St Leonard’s, participating in House sports events and House Music, as well as receiving House Colours. Gavin’s impressive list of academic achievements includes Academic Full Colours in addition to several academic excellence awards from 2017 to 2019. He received a Distinction for the Australian Mathematics Competition and a High Distinction for Physics in the Science Olympiad Competition. Gavin was also awarded the IB English A Language and Literature Prize, the IB Mathematics Prize and the IB Physics Prize in 2019.

Of the 2019 graduates who applied through Victorian Tertiary Admissions Centre (VTAC) and completed their assessments, 100% received an offer.
The most popular destination for our VCE and IBDP graduates was Monash University with 34% offered a place. Many students also gained places at the University of Melbourne (17%) and RMIT University (14%). 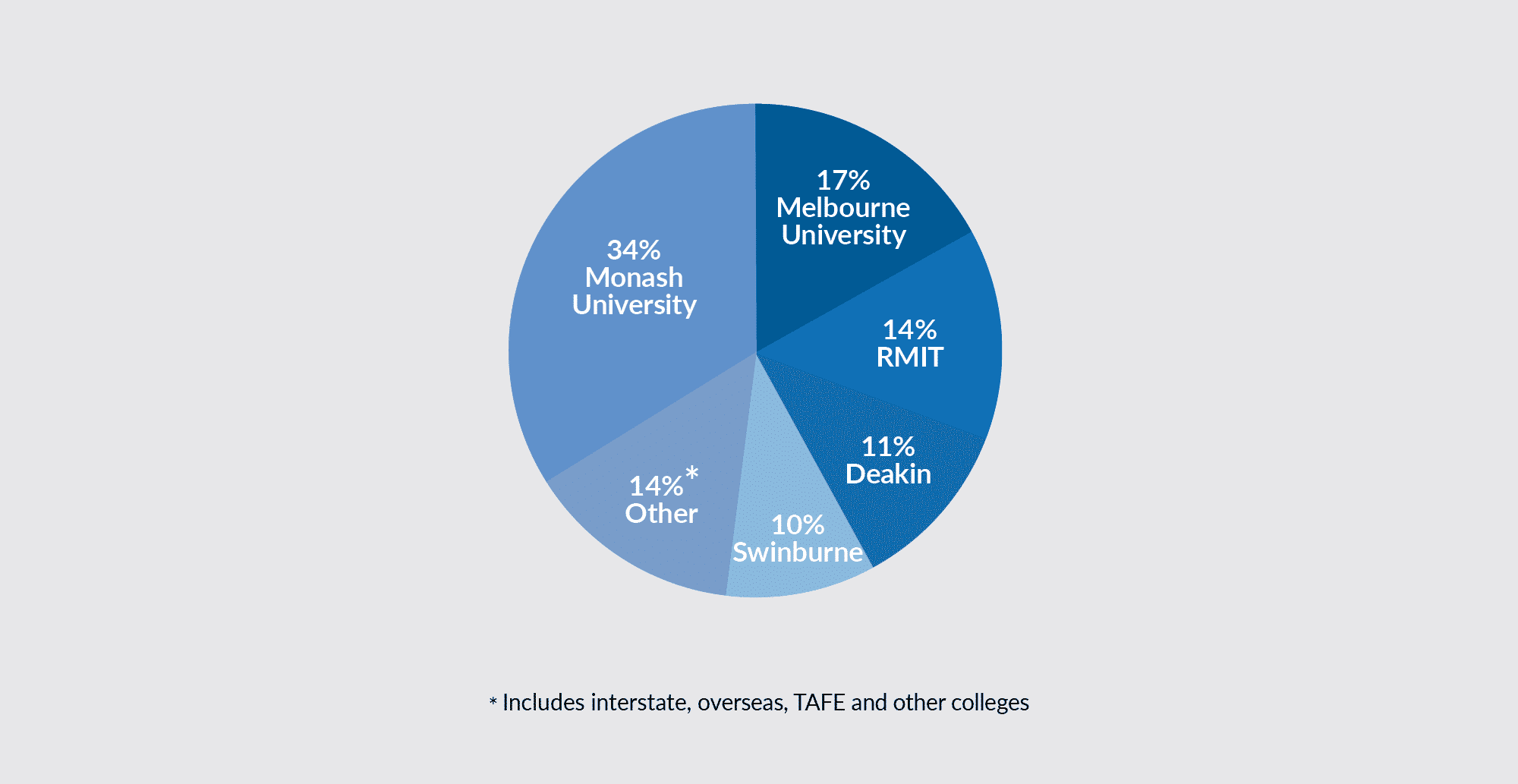 The most popular courses were Commerce/Business (23%) and Biomedical Science/Health and Medicine (14%), followed by Arts (12%), Science (11%), Art and Design (11%). Some of our students will study at interstate and overseas universities, with graduates receiving offers from universities such as ANU. Other students will be studying in Germany, South Africa and the United States of America. 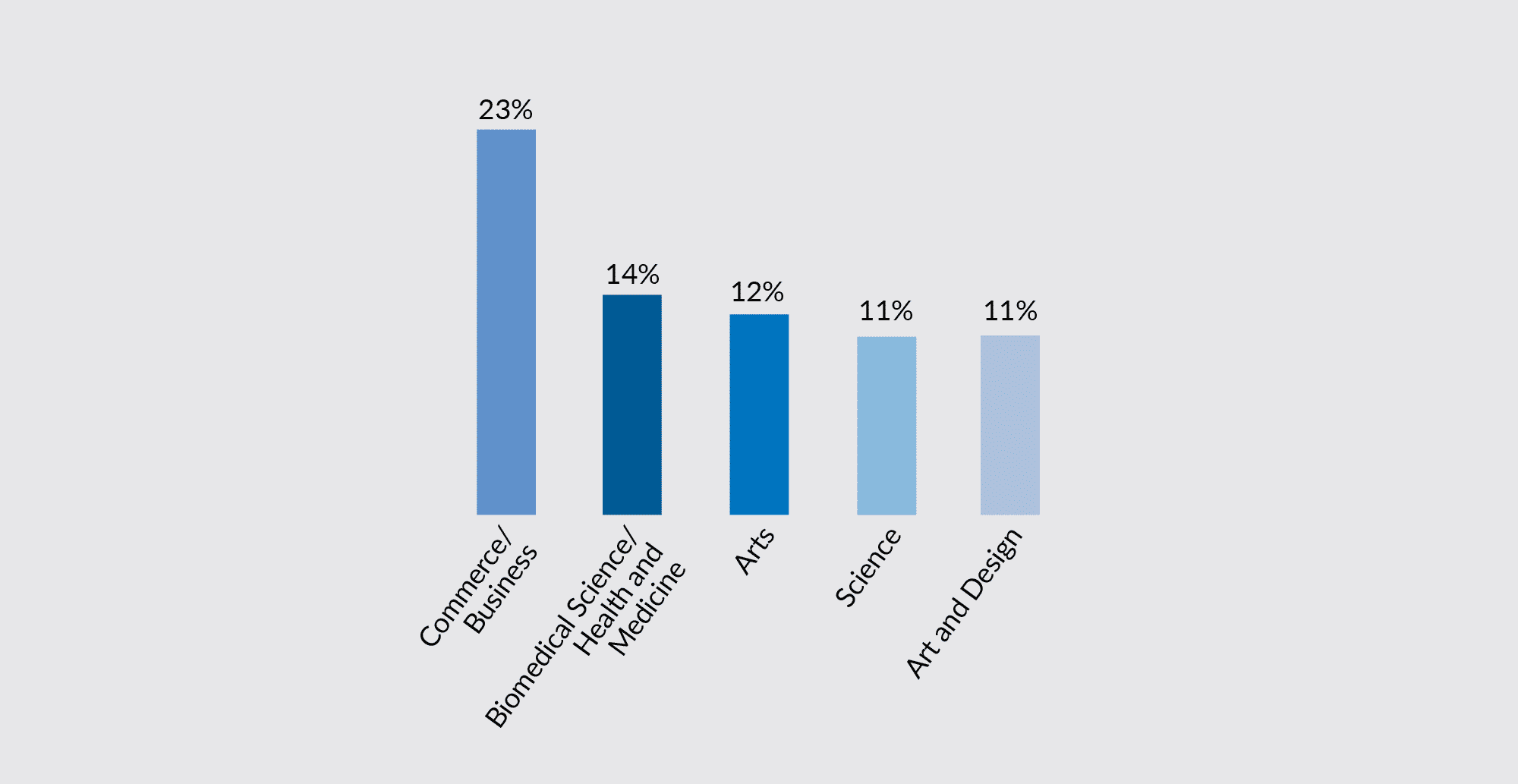